‘Hearing Palestine’ is an intellectual hub at the University of Toronto that centers the study of Palestine and facilitates advanced interdisciplinary research on Palestine, past, present, and future. 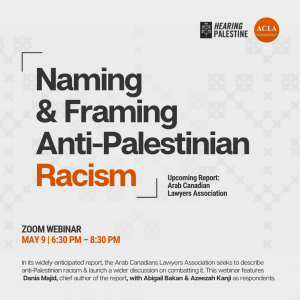 Monday, May 9 2022, 6:30PM – 8:30PM. REGISTER Event Overview:Systemic racism against Palestinians has appeared in several recent events at the University of Toronto and the TDSB, as well as other Canadian educational institutions. In its widely-anticipated report, the Arab Canadians Lawyers Association (ACLA) seeks to describe anti-Palestinian racism and launch a wider discussion about […] 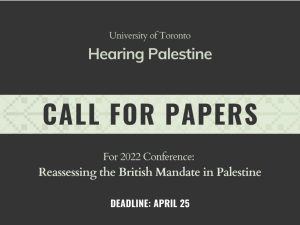 Conference is planned to be held in a hybrid format, with an in-person component in Palestine. Funding may be provided to cover partial or full conference travel expenses. Further details to be shared with accepted participants. Apply: Submit an abstract (300 words max) to palestinestudies@utoronto.ca Deadline: April 25th, 2022. Late submissions may be accepted if […] 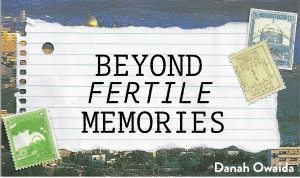 Under both the Israeli occupation and the patriarchy, Palestinian women of different generations take up varying levels of participation in resistance—a trope that is often explored in Palestinian cinema. The female characters in Michel Khleifi’s Wedding in Galilee (1988) and Fertile Memory (1980), Elia Suleiman’s Divine Intervention (2005), and Annemarie Jacir’s When I Saw You […] 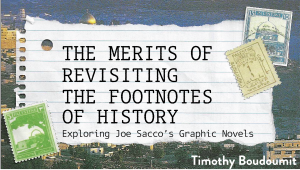 Last year, the Canadian Broadcasting Corporation (CBC) reported criticism against journalist Joe Sacco’s graphic novels. “It’s not a cartoon. It’s not a joke, […] it’s something really f–king serious,” said one man in reference to Sacco’s latest graphic novel, Paying The Land (2020), on the forgotten history of the Dene people indigenous to Canada’s Northwest […] 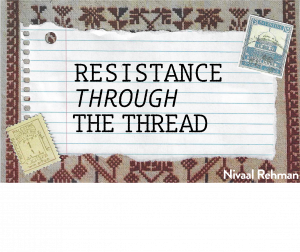 While Palestinian resistance against Israeli oppression and apartheid takes on many forms, Palestinian fashion, in particular, has become a space for designers to use traditional Palestinian embroidery and textiles to resist the erasure of Palestinian history and culture. This is because one of the consequences of settler-colonial projects like Zionism is taking pre-existing cultures and […]